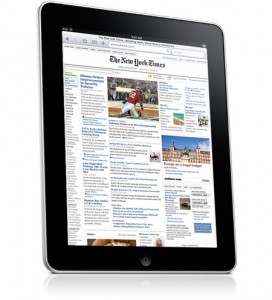 Apple has done it again!! They gave us the Mac , ipod, iphone….now here comes their latest device..the ipad. The iPad is Apple’s biggest bet on a new product since the iPhone three years ago. Analysts were impressed by the iPad’s seamless functionality, also pointed out that consumers already have smartphones and laptops for their mobile computing needs.

Jobs described the iPad as a “third category” of devices, a do-everything media gadget that can surf the Web, and play movies and video games. He also left little doubt that Apple was going after the e-book market that Amazon had popularized. It was officialy launched yesterday (wednesday 27th Jan 2010) CEO Steve Jobs dressed in his trademark blue jeans and black turtleneck, created plenty of drama as he waited until late in the event to discuss the cost of the iPad, which analysts had expected to be up to $1,000.

But suprisely it costs just $499 for for 16 gigabytes of storage which is affordable. Though there is an extra $130 needed to equip the iPad with third-generation (3G) wireless capability. Higher-capacity models will sell for $599 and $699. The half-inch thick, 1.5-pound iPad features Apple’s own processor and 10 hours of battery life. It runs a version of the iPhone’s operating system and can use virtually all of the 140,000 apps currently available for the smartphone. Other technology companies, including Microsoft Corp and Toshiba Corp, have launched tablets that failed to take off in recent years.

But analysts said they were impressed with the technology that Apple showed off. The iPad has a near life-size touch keyboard, and comes with all the expected features, including a calendar, an address book and maps. In an online poll on reuters.com before Wednesday’s media event, 37 percent of more than 1,000 respondents said they would pay $500-$699 for the tablet. Nearly 30 percent weren’t interested, while 20 percent said they would pay $700-$899. For more information about Apple-ipad follow this link Read on

Leave a Reply to Patrivk