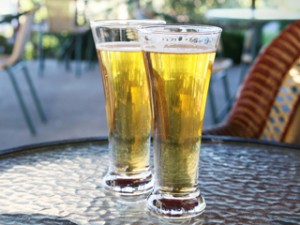 Its a known fact that men love their beer and us women we cannot stop them its a man thing!! Benjamin Franklin said it best: “Beer is living proof that God loves us and wants us to be happy.” Sometimes, beer loves us back too: Studies have suggested that, when consumed in moderation, beer has many health benefits. For instance, moderate amounts of alcohol may be good for the heart.

A study conducted by Germany, France and the United Kingdom found that moderate consumption of beer or wine may have anti-inflammatory properties, which can lower the risk coronary heart disease. The French, who drink lots of red wine and have the highest per capita alcohol consumption, actually have one of the lowest rates of coronary heart disease mortality.

Before you go out and celebrate with a few pints, keep in mind that all of the studies above point out that beer is only healthy if you drink moderately. Some scientists even consider the health benefits of alcohol for moderate drinkers to be controversial due to the variations in the methodologies of the studies.What all doctors and scientists agree on, however, is that the health risks of drinking larger amounts of alcohol will quickly outweigh its benefits; and to make matters worse, alcohol can impair your judgment, thus making it hard for you to stop at just a drink or two.

One of the most common harmful effects of alcohol is on the liver, the organ that removes toxins from the body. In the liver, enzymes first convert alcohol into acetaldehyde, a chemical intermediate that can cause nausea, headache, vomiting, and other bad effects of alcohol ingestion. To make matters worse, heavy drinking can elevate the levels of NADH, which can lead to the accumulation of fat in the liver in a condition called fatty liver.

A liver clogged with fat is not only less efficient in performing its duties, it can also lead to a reduction in the distribution of oxygen and nutrients to the liver’s cells. Left untreated, this causes liver cells to die and form fibrous scar tissue leading to scarring of the liver — a potentially deadly condition. And that’s not all — beer has a lot of calories, which can lead to obesity (not to mention a beer belly) in those who drink a lot of it. Being obese, in turn, carries a lot of health risks, including heart disease and diabetes. Read on