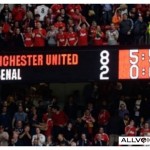 Hold on just a minute before you lose interest in reading this, this is not about football infact, it’s about the things we have to go through all life long, it’s about what you do when life has given you a beating and you don’t seem to know what to do.

A time comes in all our lives when nothing seems to be going right. When the very things you believe in are questioned, when that person you actually thought was supposed to defend you is now the attacker, when that job that was supposed to become the dream job has indeed lived up to expectations. It is a dream yes but a nightmare kind of dream. This is a time when life seems to be feasting on you and even when tasked, you may fail to get just one good thing. For Arsenal, this time came at a point least expected. Most people predicted a surprise, maybe comeback but just not this type of surprise.

I’ve said before and will insist that everything happens for the general good of your life. The puzzle is in pointing out the smallest good in what seems to be a universe of ugly happenings. If you succeed in adopting an open mind and not only looking at one side of the story, you will have lifted yourself among the 2% group of all adults. And your results will actually shock you to the point you may even be thankful to something unfortunate that has happened. Not because it made you happy but because it opened your eyes and put your life path on a different dimension.

I really don’t know what it is you are going through. I have been doing this for a long time and I know people will have pain deep down and keep it to themselves. They will go through situations that really hurt them but can never open up to anyone not even their closest allies. It’s not that the other person doesn’t care, but sometimes you feel no one may really understand. Is a common practise for humans to smile and show happiness on the inside but be hurt beyond imagination on the inside. Am talking about those things that you wish you could change. The ones that really give you the pain but you can’t even mention to anyone.

Sometimes life will hit you with a brick on the head but believe it or not it might just be what you need. If you accept it and don’t create excuses, you may come out of it all a better person than before. Your destiny is 10% what happens to you and 90% how you respond to what happens to you. In the case of Arsenal, It took humiliation in the eyes of an arch enemy. For some supporters, it would have been acceptable for that result to come from another team but not just Man United. The response has not been denial; it hasn’t been excusitis [a disease many suffer from of blaming everyone but themselves]. The response has been something that has gotten every Arsenal supporter smiling and all other opponents worried. You could say 5 players were purchased in as many days. This definitely is a place every Arsenal supporter wants to be. It took pain and humiliation to get to this point that has got everyone smiling.

Those situations that you are facing at the moment are the defining moments of your life. The challenges you now face that have made life seem worthless can be you greatest allies to growth or may eventually be your death. 80% of the People you run to are not interested in knowing what went wrong, what happened to you, who did what to you. 60% don’t really care. 50% are happy it’s you and not them. Your freedom is in how you are going to respond to what has happened. We all want to go to heaven but no one wants to die to get there. Yes it is bad, infact unfortunate, maybe disastrous, or catastrophic, you could say calamitous. And you are very right but tell me friend; what are you going to do about it…..