Dreaming Big? Look at what someone has done, aspire to do it better -Robert Ahimbisibwe 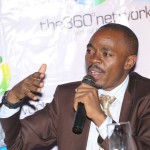 10 years ago, Robert Ahimbisibwe started Select Garments. Last year, it was named as
one among the Top 100 well managed medium sized companies in Uganda. Just this
month, Ahimbisibwe launched another shop at Lugogo based Forest Mall, the launch
that doubled as celebration of 10 years in business. He started in Kikuubo and made
his way to upmarket malls like Garden City, Forest mall. He is one of the leading
clothes dealers in town boasting of loaded corporate clientele. During the 360°
Network organized Ask the Entrepreneur Forum earlier this month, ‘Select’ as he is
fondly called, talked to aspiring entrepreneurs about his secret to success.

You went to school, why are you in Kikuubo?
Robert: I am in Kikuubo to make money.

Why clothes?
Robert: When you take a look at the people around you; you won’t know the kind of
house they sleep in or how they move. The only thing you’ll see are clothes. 90% of
our bodies are covered in clothes. Money is in the business of clothes.

Why didn’t you do something in the line of what you studied?

Robert: Business success is not about what you studied! It is about passion. You
have to be passionate about what you do. Skills are very important but I’d rather
hire someone with attitude. You can train skills for example you can train someone
computer, how to run a machine but you cannot train them the right attitude if they
don’t have any to begin with! You can’t impart positive attitude.

What is your secret to success?
Robert: Dreaming big. Have the drive and you will achieve what you want. The first
time I came to Kampala, I got a ride from a distant relative. What I saw first was
the taxi park –there were so many cars! I had never seen so many cars in the same
place! I remember thinking to myself, if there are so many cars in the world like
this, I want to own one! If you have that kind of drive, the feeling that you can
make it!

How did you raise capital?
Robert: After I left school, I tried to look for jobs and made over 100 job
applications in one year: my sister was working in a government institution so I
could afford photocopy. I took applications to almost every office in town. But I
did not get the job! My brother was working at Entebbe Airport as a Client Agent so
I started hanging there. He was not too happy about it, he told me “I educated you
to get a good job, I want you to get a government job to pull up our family. But I
saw what was being done by some people there and I learnt quickly. People started
hiring me to do their jobs on a sub contract basis. Eventually my brother started
paying me. Within the first year I was at Entebbe, I was able to buy my own car from
the savings I made. I always dream big. 2-3 years down the road, things were not
good. There was no money that’s when I realized I wanted to start my own business

What’s the secret to developing career wise?
Robert: Every job you do, create a relationship; you never know what will help you.
People I associated with at the airport cleared clothes. Through my association with
them, I knew everything there was to know about clothes. I did not have money so I
sold my Toyota Kikumi. In 2001 I started Select Garments at Mutaasa Kafeero.

What advice would you give to a young entrepreneur?
Robert: Skills are important but they are the least you should emphasize. When you
decide on what you want to do, choose something you love. Do it with enthusiasm and
right attitude. Everything you do, do it to your best. Don’t do so much when you are
not doing it right!

What is the difference between Chinese, Indians and Ugandan traders? What makes them
successful?
Robert: Saving culture. Ugandans do not know how to separate business money from
personal money. The Asian business man cannot touch money for business to do
something personal.
More so, they have a family system: they train earlier than we do. When someone is
born, they start grooming him to take over family business. When an Indian father
employs his son, the son starts with the low jobs and builds up. Here when a father
hires the son, they make him the managing director even when he has not proved the
right candidate for the job.