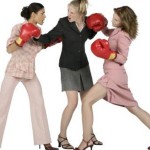 Everyone has to deal with difficult people, whether they are argumentative, abusive, stubborn, or combative. The question is, how can you assert your own rights without creating an unnecessary incident?

In most cases, angry people are screaming to be heard. They want to be valued, loved, and listened to. They want to feel important but aren’t able to express themselves constructively. With the right attitude, it’s possible to get past these insecurities and reach an understanding.

These 7 strategies will help you setting disputes quickly and peacefully for the benefit of everyone involved:

1. Remain calm. Be still and say nothing. Let the storm run its course. Often times the angry person wants to provoke you. Arguing is ineffective because it raises barriers.

2. Let the other person do the talking. He or she will soon grow tired of it. Sometimes that’s all they want. To be heard. To feel important. Everyone wants to feel important. Some people just express it in ways that are counterproductive.

3. Genuinely consider the other person’s point of view. Imagine yourself in his shoes. Never say “you’re wrong.” In fact, try hard to look for areas of agreement and build on them.

4. There’s power in the words “Yes, yes, I see exactly what you’re saying. You mean…….” This shows the other person you hear him/her. That’s all they usually want — to be validated. By agreeing with them, you gradually break down the other person’s anger.

5. If the situation turns verbally abusive, put a stop to it. Firmly but calmly state: “You’re very angry right now and you’re saying things you don’t mean (give them the benefit of the doubt). I’m going to excuse myself. We can talk again after you calm down.” Then leave the room or ask them to leave.

6. If you are wrong, quickly admit it and take responsibility. You could say, “You’re absolutely right, it is my fault and here is what I’ll do to fix it.” Even if you’re NOT wrong, at least give them the benefit of the doubt, “I may be wrong, let’s look at the facts together.” It’s hard to argue with that!

These words have tremendous power. Not only does it validate the other person’s viewpoint but it also diffuses the tension. You might be surprised by what happens afterwards. The person could end up defending you. You’d be amazed how an attacker suddenly becomes an ally.

7. Use the power of visualization. If you’re dealing with someone you interact with on a daily basis (like a boss or co-worker), try to imagine that person as a loving spiritual being. I did this with a boss I had at a Wall Street bank several years ago. He was an absolute tyrant and gave everyone a hard time. In retrospect, he was clearly unhappy and insecure.

One day I started to visualize him as a loving grandfather. When he was in a good mood, he would lovingly talk about his grandchildren. His eyes and face would light up with incredible joy, leading me to realize there was a softhearted man behind the hard facade. Every morning before going to work, I imagined him romping around in the backyard on a warm, breezy day with his grandkids squealing and laughing with delight.

Long story short, this man promoted me almost 1 year later, in no small part due to the power of visualization. No one can dispute that this works because I’ve lived to tell the story. I’ve used it win trips to Mexico and Bermuda (sales contests at Merrill Lynch), to forgive those who have hurt me, to become the world’s first deaf instrument pilot, and to give powerful presentations.

Food for thought: Think about how you’ve dealt with difficult people in the past. Were you tempted to prove them wrong, trying to save face? Were you able to see through the facade and recognize that all they want is to be heard, loved and validated? Have you tried the power of visualization?