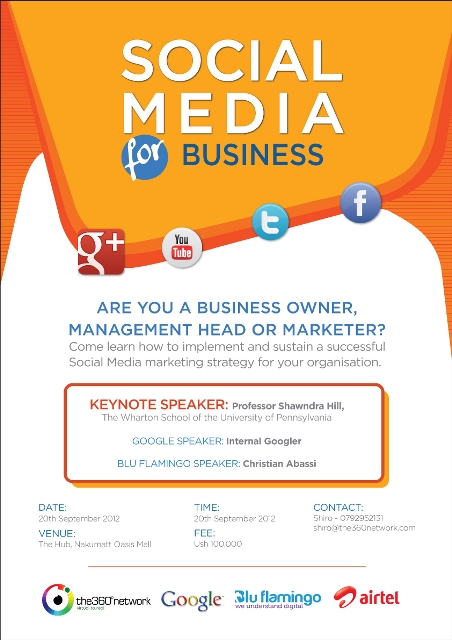 Two International social media experts have confirmed that they will sharing knowledge at the social media for business event , an event organised by The 360 network, Blu Flamingo, Google Uganda and Airtel Uganda.

One of the confirmed is Shawndra Hill  an Assistant Professor in Operations and Information Management at the Wharton School of the University of Pennsylvania. Her recent research investigates the links between TV and Social Media . She also researches the value to companies of mining data on how consumers interact with each other — for targeted marketing, advertising and fraud detection.

The other confirmed speaker, Christian Abassi a cutting-edge brand builder and digital guru that has successfully trained some of the best talent in South, East and Central Africa and engaged with many blue chip corporations. Chris was instrumental in building some respected agencies in Africa. He is now in the process of building a true Pan-African integrated branding and digital group. specialises Branding & Positioning, Digital Marketing, Digital Strategies, User Experience Design, Broadcast Design, Sound Design, Motivational Speaking

The speakers will explain everything any Management Head or Business Owner needs to know on how to implement and sustain a successful Social Media marketing strategy for their Organization. This intensive Social Media Marketing Event will feature a series of interactive presentations, actual East African and Ugandan case studies of companies that have successfully implemented Social Media as their greatest marketing tool, Q&A sessions and a networking cocktail.

The “Social Media For Business” event will take place at the HUB .Nakumatt Oasis mall on Thursday the 20th of September. Interested parties can contact Shiro at shiro@the360network.com /0792952131 to reserve places.

The 360° Network is an organization that brings together both virtual and real people networks to foster interaction, knowledge sharing and opportunities. Through several meetings, activities and the website http://www.the360network.com, opportunities and avenues for interaction and networking are created.

Specifically, the 360° Network is designed to leverage the powerful networking and communication synergies provided by Social Media like Facebook for the benefit of their membership and business entities alike.

Members of existing Social Networks join the 360°Network Group and Page currently on Facebook. We believe that this alone, is a unique and real people -2-people social/business networking, continuous learning and personal development opportunity for members.