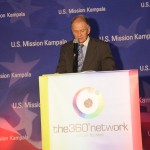 The U.S. Mission Uganda announced the launch of its social media platform at the 360° iForum & Cocktail at Garden City Rooftop on 25 January 2011 . In his speech about the role of Social media and Internet Freedom in Uganda, the US Ambassador to Uganda, Jerry P. Lanier said that the internet has made the world much smaller and communication more efficient. He noted how “during his visit to China in November 2009, for example, President Obama responded to a question via the internet. He told listeners, both cyber and physical, “The more freely information flows, the stronger societies become.” He said information helps citizens hold their governments accountable, generates new ideas, and encourages entrepreneurship.” He also noted that Internet freedom is under threat. “Internet freedom is becoming the freedom of assembly for the 21st century. Blogs, emails, social networks, and text messages have opened up new forums for exchanging ideas, and created new targets for censorship. Read the ambassador’s moving speech in Full here.

The pages give resources for students, media, businesspeople, and others interested in promoting ties between the United States and Uganda. They are a source of information about current events, U.S. news, media, cultural, and educational events sponsored by the U.S. Mission in Uganda. Ugandans can use these sites to reach out to one another and to ask questions, make comments or raise concerns with the U.S. Mission.

The Facebook and Twitter pages contain a variety of information including updates on the U.S. Mission’s Information Resource Center, the Education USA educational advising program, announcements regarding cultural activities, and information for U.S. visa requirements. The Flicker and YouTube pages provide updated photos and videos covering events at U.S. Mission Uganda. The goal of this new platform is to encourage a constructive dialogue among members of our dynamic U.S. and Ugandan online communities.